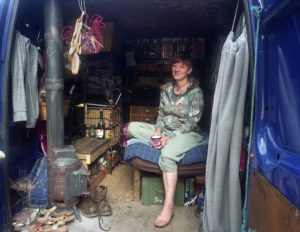 Jessica is a sculptor and performance artist who lives off-grid. She recently finished studying for an MFA at University of Leeds and graduated with a distinction. She is presently in residence as ‘Creative Caretaker’ at Wild Rumpus in Cheshire.

Alongside her solo practice she has worked for the last ten years as a freelancer producer, theatre deviser and artistic director of outdoor arts. She runs her own company Rost Productions ltd, which is a collaboration of makers, technicians and performers who create outdoor installation and street theatre, which tours across the UK.

She co-founded Festive Road in 2005 -an MK based community interest company – for which she developed, raised funding and project managed the creative direction of, for many years (2008-2018). Here she was delivering artist training programmes, outreach projects, making and producing street theatre work, outdoor shows, public art commissions, workshops and many celebratory events.

2010     Darwinias Random Selection     Scratch performance at The Fishmarket in Northampton

Jessica has delivered numerous creative projects in schools and now focuses mainly on public and community participation work -most recently working on a public engagement project with Vodafone UK. At Festive Road, 2005-2018, she helped deliver hundreds of workshops and community led projects. Between 2008 and 2011 Jessica was working as a Creative Agent and a practitioner for UK Centre for Carnival Arts in Luton and also as a lead artist for various schools in Oxfordshire and Bedfordshire.

Jessica has had training and is skilled in the following: